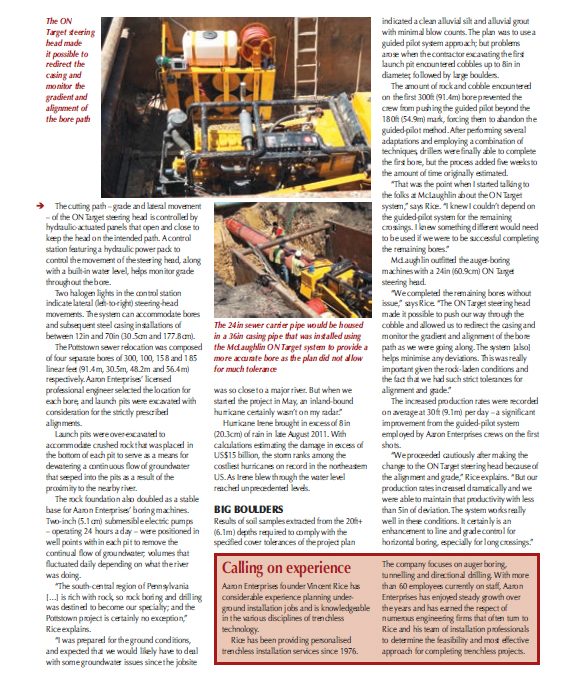 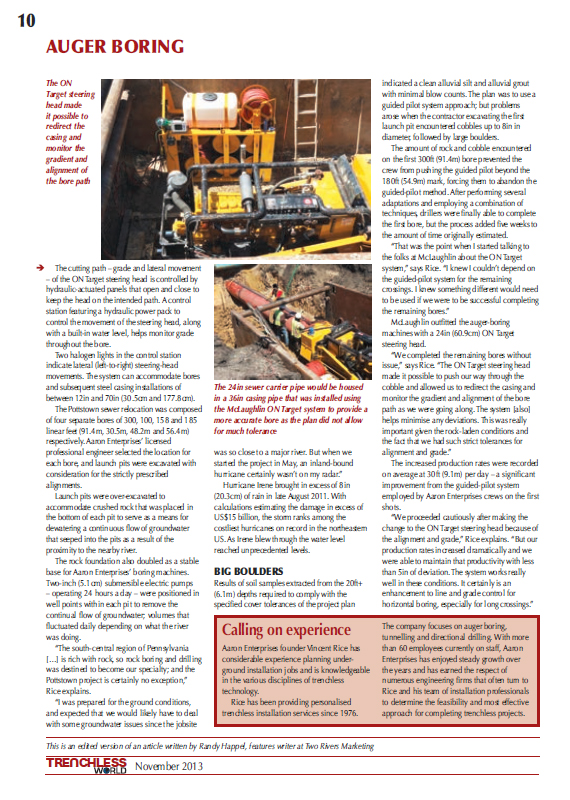 In Montgomery County, Pennsylvania, Aaron Enterprises served as general contractor for a gravity sewer job that was initiated as a precursor to a road construction project. This required existing sewer mains to be relocated due to a design change in the approach and exit ramps of Benjamin Franklin Highway.

Grade tolerance was an issue, as the project was at 0.22% minimum slope.

“Maintaining the gradient was absolutely critical,” founder and president of Aaron Enterprises Vincent Rice comments. “The carrier pipe of the sewer was specified as 24in (61cm) iron mainline and the casing pipe was only 36in (91.4cm) diameter, so we didn’t have much tolerance. The other concern was the close proximity of the existing sewer. Alignment was critical because of the highway changes. At many points along the bore path, the new line was within 5in (12.7cm) of the existing sewer.”

The lines also needed to be positioned deep often exceeding 20ft (6.1m). An additional concern surfaced from the shallow water table of the nearby Schuylkill River.

In the Right Direction

Engineers hired by Pottstown municipal officials recommended auger boring as the installation approach to complete the sewer relocation project. After encountering time-consuming challenges with the specified method on the first two bores, Rice employed the ON Target auger-boring system – developed and manufactured by McLaughlin – to navigate the strict, narrow gradient tolerances required for the two remaining bores.

The ON Target system allows contractors to control both horizontal and lateral directional changes within the bore path.

“Prior to developing the ON Target auger-boring system, contractors were limited to a steering head that offered only horizontal (up and down) directional changes during a bore,” Dave Gasmovic, president of McLaughlin, says. “The ability to control the boring direction in a lateral, left-to-right movement provides greater accuracy for difficult on-grade bores. The ON Target system provides contractors with a significant upgrade from the traditional manual knuckle technology that has been used by the industry for many years.”

The cutting path – grade and lateral movement of the ON Target steering head is controlled by hydraulic-actuated panels that open and close to keep the head on the intended path. A control station featuring a hydraulic power pack to control the movement of the steering head, along with a built-in water level, helps monitor grade throughout the bore.

Two halogen lights in the control station indicate lateral (left-to-right) steering-head movements. The system can accommodate bores and subsequent steel casing installations of between 12in and 70in (30.5cm and 177.8cm).

The Pottstown sewer relocation was composed of four separate bores of 300, 100, 158 and 185 linear feet (91.4m, 30.5m, 48.2m and 56.4m) respectively. Aaron Enterprises’ licensed professional engineer selected the location for each bore, and launch pits were excavated with consideration for the strictly prescribed alignments.

Launch pits were over-excavated to accommodate crushed rock that was placed in the bottom of each pit to serve as a means for dewatering a continuous flow of groundwater that seeped into the pits as a result of the proximity to the nearby river.

The rock foundation also doubled as a stable base for Aaron Enterprises’ boring machines. Two-inch (5.1cm) submersible electric pumps – operating 24 hours a day – were positioned in well points within each pit to remove the continual flow of groundwater; volumes that fluctuated daily depending on what the river was doing.

“The south-central region of Pennsylvania […] is rich with rock, so rock boring and drilling was destined to become our specialty; and the Pottstown project is certainly no exception,” Rice explains. “I was prepared for the ground conditions, and expected that we would likely have to deal with some groundwater issues since the jobsite was so close to a major river. But when we started the project in May, an inland-bound hurricane certainly wasn’t on my radar.”

Hurricane Irene brought in excess of 8in (20.3cm) of rain in late August 2011. With calculations estimating the damage in excess of US$15 billion, the storm ranks among the costliest hurricanes on record in the northeastern US. As Irene blew through the water level reached unprecedented levels.

Results of soil samples extracted from the 20ft+ (6.1m) depths required to comply with the specified cover tolerances of the project plan indicated a clean alluvial silt and alluvial grout with minimal blow counts. The plan was to use a guided pilot system approach; but problems arose when the contractor excavating the first launch pit encountered cobbles up to 8in in diameter, followed by large boulders.

The amount of rock and cobble encountered on the first 300ft (91.4m) bore prevented the crew from pushing the guided pilot beyond the 180ft (54.9m) mark, forcing them to abandon the guided-pilot method. After performing several adaptations and employing a combination of techniques, drillers were finally able to complete the first bore, but the process added five weeks to the amount of time originally estimated.

“That was the point when I started talking to the folks at McLaughlin about the ON Target system,” says Rice. “I knew I couldn’t depend on the guided-pilot system for the remaining crossings. I knew something different would need to be used if we were to be successful completing the remaining bores.”

McLaughlin outfitted the auger-boring machines with a 24in (60.9cm) ON Target steering head.

“We completed the remaining bores without issue,” says Rice. “The ON Target steering head made it possible to push our way through the cobble and allowed us to redirect the casing and monitor the gradient and alignment of the bore path as we were going along. The system [also] helps minimize any deviations. This was really important given the rock-laden conditions and the fact that we had such strict tolerances for alignment and grade.”

The increased production rates were recorded on average at 30ft (9.1m) per day – a significant improvement from the guided-pilot system employed by Aaron Enterprises crews on the first  shots.

“We proceeded cautiously after making the change to the ON Target steering head because of the alignment and grade,” Rice explains. “But our production rates increased dramatically and we were able to maintain that productivity with less than 5in of deviation. The system works really well in these conditions. It certainly is an enhancement to line and grade control for horizontal boring, especially for long crossings.”