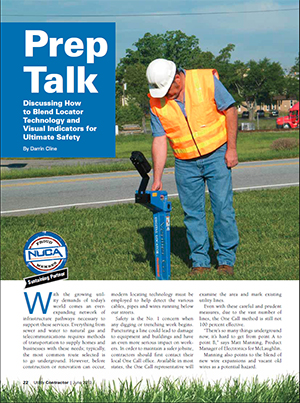 With the growing utility demands of today’s world comes an ever-expanding network of infrastructure pathways necessary to support these services. Everything from sewer and water to natural gas and telecommunications requires methods of transportation to supply homes and businesses with these needs; typically, the most common route selected is to go underground. However, before construction or renovation can occur, modern locating technology must be employed to help detect the various cables, pipes and wires running below our streets.

Safety is the No. 1 concern when any digging or trenching work begins. Puncturing a line could lead to damage to equipment and buildings and have an even more serious impact on workers. In order to maintain a safer jobsite, contractors should first contact their local One Call office. Available in most states, the One Call representative will examine the area and mark existing utility lines.

Even with these careful and prudent measures, due to the vast number of lines, the One Call method is still not 100 percent effective. “There’s so many things underground now, it’s hard to get from point A to point B,” says Matt Manning, Product Manager of Electronics for McLaughlin. Manning also points to the blend of new wire expansions and vacant old wires as a potential hazard. “Companies and utilities are still upgrading and they’re still building; they don’t pull that old stuff out of the ground,” Manning says. “Should the contractor come in contact with a line, they don’t know whether it’s abandoned or active. He has no way of knowing.”

Other hazards can arise when working on private lands. Private property owners are also required to contact One Call before digging. According to Manning, it is the responsibility of the hired contractor to locate private utilities. Examples may include water and electric services to an out building. He also recommends sometimes even visiting the site before contacting One Call. By doing this, a contractor can do “white lining,” which is a preliminary marking process that lets One Call know where you plan to dig.

In order to make sure the markings are correct and verify all lines are ac-counted for, contractors can utilize their own utility locators for insurance. Locators increase efficiency and minimize the chances for accidents. According to Manning, using locators is similar to tuning in to your favorite radio station. When signals are transmitted from the various utilities, the locator, much like a radio, is de-signed to pick up each respective signal. The locators are able to recognize the signals and determine the appropriate location of underground utilities. Passive sweeping can further the clarity of location. With this method, a contractor may sweep the area with a receiver that detects utilities radiating frequencies.

In certain cases, some lines do not generate a charge or transmit a signal. For these lines, a transmitter is implemented to create a signal that detects a metal line, thus allowing the locator to find a signal. Along with the use of locators, a number of visual cues can be employed to help a contractor discern the location of underground lines. According to Manning, items such as telephone pedestals, power transformers, gas meters, water valves and gas valves can be seen and will give workers an idea of the property on which they will be working. It also gives them clues as to services that are in use in the neighborhood and lines of which to be conscientious. This method can also be especially helpful when working around gas lines. Even though the gas line may not be serving the home or business on the present worksite, a visual meter or valve could be a sign that there is a gas line running through the area. “So if there’s a gas valve, meter or anything else that you see but you don’t see the correlating color paint on the ground … you will then need to call the gas company and One Call and determine where the service is being provided,” Manning says. “They will then take out yellow paint and write ‘okay’ or ‘clear.’ That’s required in most states.”

Another key visual marker to be wary of is trench lines. These lines are sunk-en areas and cracks in the pavement or ground that are caused by something being underground in that area in the past. Determining the depth, not only direction, of the lines is also crucial to safety when beginning a dig. “One common mistake I see is not using the utility locator estimated depth reading when digging down to where they assume the utility line should be,” Manning says. “They start exposing a utility only to an average depth point where the utility is normally located. Then without visually determining the location of the utility line, begin digging a cross trench.”

Exposing lines prior to full excavation is also recommended to get a definitive location of the utilities. For years, potholing has been done with a shovel, but one wrong move and a line can be severed. Vacuum excavation is the preferred alternative as it is quick and nondestructive; it gives a clear idea of where the utility is located under-ground, but the hole created is very clean and does not cause a mountain of dirt in the landowner’s yard.

For Manning, the pinnacle reason for incorporating these tools and tips be-fore beginning a job is efficiency. By being safe, using a locator and checking all visual signals, contractors can save time and money and ensure the best possible jobsite. “Locators don’t necessarily make you money, they save time and that equates to money saved,” Manning says. “They can save you 30 minutes on a jobsite because it’s a more efficient method of utility locating, allowing a contractor to eliminate some of the digging. It’s worth it when you think about the amount of time you can save over several projects in a week.”

Darrin Cline is a Features Writer for Two Rivers Marketing, based in Des Moines, Iowa.